The e-invoicing landscape has been changing rapidly in recent years. The global market is booming with e-invoicing solutions. In the European Union the main factor that enables fast-paced development in this area is the EU VAT Directive reform. It introduced the definition of the electronic invoice and creation of the cornerstone e-invoice rules, i.e. authenticity of origin, integrity of content and legibility of the invoice.

Further progress was made in public procurement in the EU to enable undisrupted transactions in the B2G sector between providers and authorities from different countries. The B2G sector is already harmonized in terms of e-invoicing rules across EU countries. 2020 is the year when all Member States should have finalized implementation of the e-invoicing regulations. The majority have already complied. However, there are still a few countries that have delayed implementation of the EU Directive.

All EU Member States are required to implement the e-invoicing regulations defined in the Directive 2014/55/EU (e-invoicing Directive). It means that in all EU countries transactions between public authorities and other entities will trigger the obligation to use an e-invoice which meets the criteria of the European Standard as defined by the EU. This concerns situations where any authority, organization or body governed by public law is a party to a transaction.

Who is obliged to use e-invoicing in B2G transactions?

It should be underlined that the EU requirement as regards B2G e-invoicing focuses on public authorities’ ability to receive and process the e-invoice. It does not impose any such obligation on the supplier. This means that invoices may be submitted in any format, including paper.  In practice, the majority of the Member States also include a mandate for the vendor (so-called economic operator) to submit (send) an e-invoice. However, in nine of the Member States (see: table below) the supplier may choose to issue a compliant e-invoice in B2G transactions.

When does B2G e-invoicing become obligatory?

The obligation to implement regulations has been spread across 2018 – 2020. The first deadline fell on 27 November 2018. However, a majority of countries used the extension options, which allowed them to postpone implementation till 18 April 2019 for central authorities and till 18 April 2020 for sub-central authorities. Eventually, the majority of EU Member States met the latter deadline. There are still three countries where these regulations have not been imposed yet.

The intention behind EU e-invoicing regulations was to harmonize e-invoicing across the EU, enabling interoperability in public procurement. For that purpose it entailed creation of a standard which will apply across the EU Member States in the same way.

What is the EU e-invoicing standard?

The e-invoicing harmonization is limited to the semantic standard of the e-invoice. In other words, EU law indicates the set of data and fields which must appear in such a document. However, the infrastructure, which enables creation, transmission and archiving of the e-invoice, is a separate solution and may be managed independently by providers in different countries.

The EU e-invoicing standard (EN 16931), apart from the semantic part, has to ensure the unified format of the document by using syntaxes. Currently only two syntaxes meet the criteria of the e-invoice standard: UBL and CII, which do not exclude the existence and usage of the country-specific syntaxes (formats) of the e-invoice. However, in recent years it has become apparent that PEPPOL represents the most common solution for global e-invoicing. PEPPOL BIS Billing 3.0 is a Core Invoice Usage Specification (CIUS). It is considered as meeting the criteria of the e-invoice standard (similarly to UBL and CII syntaxes). Owing to its high safety standard, PEPPOL has already been in widespread use not only across the EU but also globally.

The mandatory e-invoicing in B2G sector has been implemented in 24 Member States. Germany and Greece are proceeding and aim to finalize implementation within 2020. The remaining two countries are Romania and Slovakia, who have missed the deadline and are only starting their B2G e-invoicing journey.

The above map and the table below summarize the state of play for B2G e-invoicing across EU countries. The details of the status of implementation are monitored and can be followed under the official EU e-invoicing country guide.

It should be noted that there are various reasons for introducing e-invoicing across Member States. However, despite certain differences the fact of getting B2G e-invoicing operable across a majority of EU countries is already impressive. It is evident that B2G mandatory e-invoicing is simply a stage in the journey to enabling international e-invoicing across sectors and jurisdictions on a global scale.

The summary clearly shows that governments do not only comply with rules imposed by the EU, but make efforts to set higher standards, e.g. by extending the obligation for e-invoicing to suppliers (16 countries). This will enhance B2G e-invoicing harmonization and also open new possibilities in B2B and B2C e-invoicing. Furthermore, some countries have already implemented mandatory B2G e-invoicing before it has become an obligation under EU law (e.g., Italy, Spain, Finland).

Another fact worth noticing is common use of PEPPOL. which quickly became popular and is on the way to becoming a leading global standard for e-invoicing. Despite multiple national e-invoice standards in place across EU currently, PEPPOL seems to bring the most flexible solution for e-invoicing. 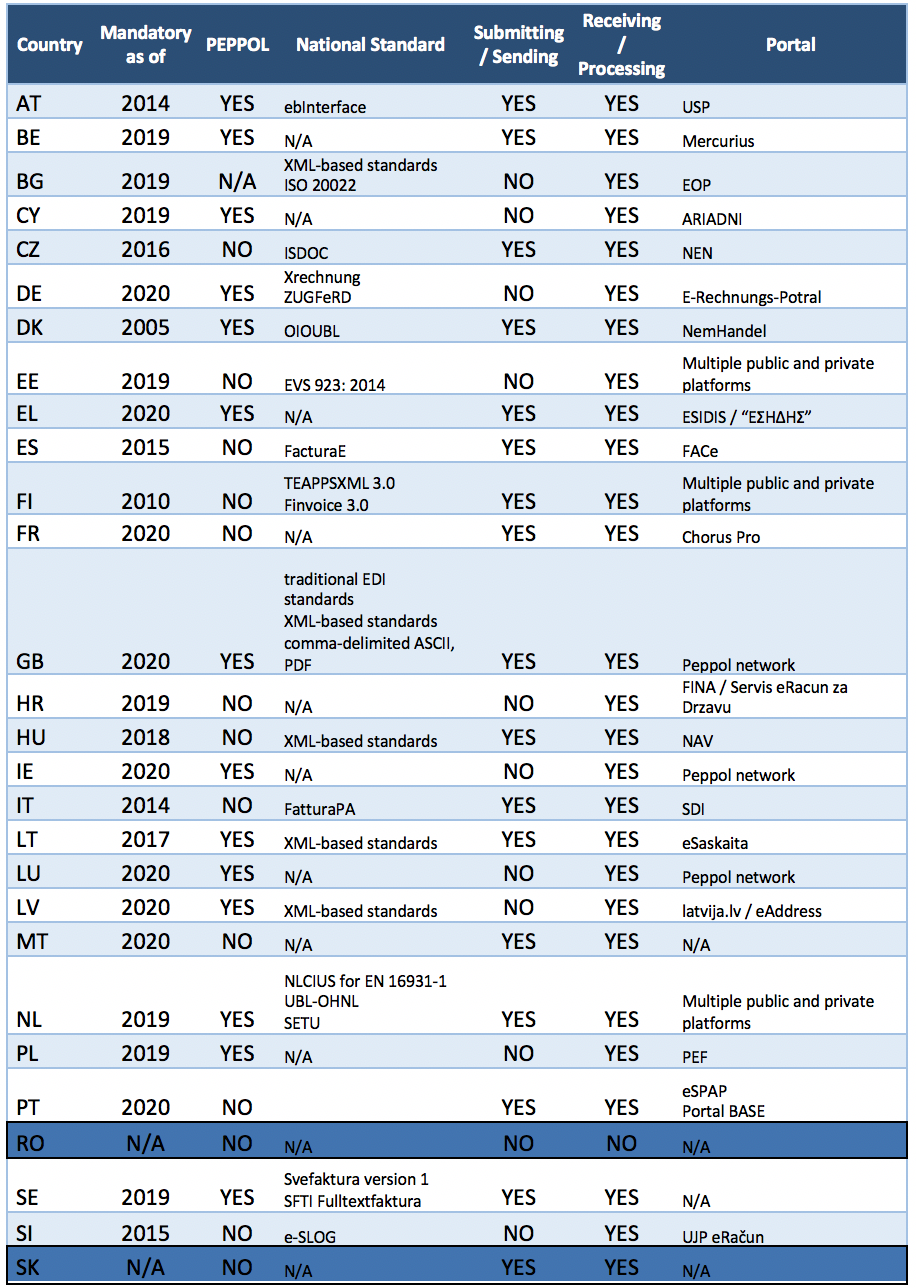 4.What is the next step?

It seems natural that following public authorities the EU B2B/B2C sector will enter the e-invoicing world (with time also on a mandatory regime). In fact, this is already happening as mandatory B2B e-invoicing is implemented and applied in Italy (since 2019) and Portugal. It is also considered by a few governments (e.g. France, Poland, Spain).

Still, the end state is even further. It should be mentioned that e-invoicing promotion is strongly linked to VAT fraud and VAT gap. Apart from sector-wide usage of e-invoicing (B2G, B2B, B2C), the B2T (clearance model) is expected as the final stage for all EU countries to prevent large-scale VAT stealing. The examples of Hungary (Online Szamla) and Italy (FatturaPa) but also LATAM experience (e.g.. Mexico, Chile, Brazil) leave no doubt as to effectiveness of this system (the latter non-EU jurisdictions have already proven up to 50% reduction in tax evasion / VAT gap).

EU B2G e-invoicing harmonization should be considered an important milestone and a chance to spread usage of e-invoicing across sectors and also for tax compliance purposes. There is good reason for choosing B2G as the first sector to introduce mandatory e-invoicing – a great number of large entities (approx. 70%) supply to public authorities. This means many transactions will now or in the near future be documented with the e-invoice.

Having finalized the last stage of implementation (April 2020), the EU is now ready to take up new challenges in imposing e-invoicing regulations. 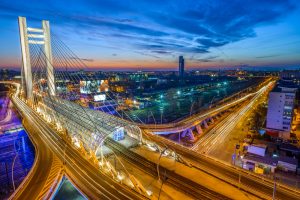 Mandatory SAF-T in Romania from 2022