E-invoicing in the Philippines

Asia is becoming a leader in digital tax reporting. Many Asian countries introduce electronic obligations, including Vietnam, Thailand, and South Korea. Another country implementing e-invoicing is Philippines. The pilot phase came into force in July 2022, while full implementation is expected in January 2023.

Mandatory e-invoicing is a part of Filipino tax reform called TRAIN (Tax Reform and Inclusion Law). The aim of the TRAIN package is to simplify the tax system and make it more efficient. To achieve these goals, there is a strong focus on digitalization.

The tax authorities of the Philippines (Bureau of Internal Revenue, or BIR) are responsible for maintaining the national e-invoicing system, which is officially called the Electronic Invoicing/Receipting System (EIS).

The pilot phase of EIS Philippines was launched in July 2022 and covered about 100 of the largest Filipino taxpayers. However, from January 2023 the following taxpayers will also need to enter the EIS:

It is expected that other, smaller taxpayers will later also be covered by EIS. However, there is no official timeline provided yet.

It is also worth underlining that the Filipino e-invoicing system is based on South Korea’s e-invoicing experience. Moreover, the Korean government was directly involved in the development of EIS and supported the project financially with USD 7.3 million. South Korea plans to donate a further USD 55 million the the development of EIS to support the Philippines in improving taxpayer services and make tax collection more efficient. 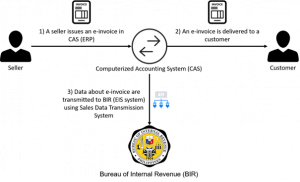 Unfortunately, there are few technical details about the EIS system provided by BIR. However, relevant Revenue Regulations no. 8-2022 and 9-2022 provide some policies and guidelines for implementation of EIS.

Taxpayers covered by electronic invoicing obligation are required to develop a sales data transmission system to allow them to submit their invoices to BIR/EIS. Most commonly, this system will be part of a computerized accounting system (CAS). The CAS requirement was introduced some time ago and forces companies to produce their accounting records in a strictly defined format set by BIR. Both the CAS and the sales data transmission system need to be certified by Filipino tax authorities.

Development of sales data transmission systems should be based on standard application programming interface (API) guidelines. Data about invoices submitted to EIS should be generated in JSON format. JSON, along with XML, is one of the most common standards in digital tax requirements.

As the aforementioned revenue regulations state, the transmission of e-invoice data should be done in real time or near real time, and no later than within three calendar days of the date of transaction. Still, e-invoices will first need to be sent to customers. Therefore, EIS is not a clearance e-invoicing model, as used for example by the Italian SDL. However, it still should be considered as demanding electronic tax obligation.

Here is a list of invoice elements that need to be transmitted to EIS is similar to standard invoices and covers, among others:

Usually, introduction of digital tax reporting requirements, especially regarding e-invoicing, lead to removal of some other existing obligations. It is no different in case of Filipino EIS. Taxpayers covered by EIS do not need to submit the Summary List of Sales (SLS) anymore. However, the Summary List of Purchases and Importations will still be required.

On the other hand, only purchase invoices transmitted through EIS are subject to VAT claims. Documents from outside the EIS system should be considered unreported sales and consequently may not support VAT deductions. This strict approach is aimed to achieve broad compliance with EIS obligation.

Moreover, lack of or late submission of e-invoice to the EIS system will be subject to penalty, yet undefined by BIR.

EIS: still a lot to do

Although the EIS pilot phase is already live and the introduction of the mandatory phase is just four months away, there is insufficient information published by the Filipino tax authorities. There are regulations available, although they provide a minimal amount of technical detail about invoice structure, API details, and so on.

Unfortunately, the official website of BIR looks old fashioned and, more importantly, does not have an area dedicated to EIS. The above issues are surprising, considering the involvement in the EIS project of South Korea, which is considered one of the most advanced countries when it comes to digitalization. Nevertheless, in January 2023 all covered taxpayers need to adopt to EIS. So the sooner companies start their implementation projects the better. 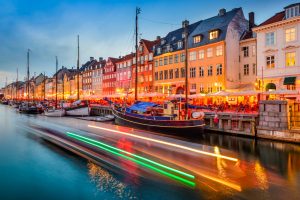