Mandatory e-Invoicing in South Korea in 2022

South Korea introduced a comprehensive e-invoicing model as far back as 2010, and is considered one of the leading e-invoicing jurisdictions in Asia, alongside places like Singapore, Taiwan, and Kazakhstan. South Korea launched a Integrated Tax System in 1997, which involved multiple layers of the tax administration system. In terms of e-invoicing, the two major elements of the system are the electronic invoicing obligation (the Electronic Tax Invoice) and an electronic reporting requirement (the Neo Tax Integration System).

Currently the e-invoicing obligation applies to both legal entities and individuals whose turnover is equal to or exceeds KRW 0.3 billion (around $250,000). The invoice digitalization obligation entails different types of accounting documents, like invoices, credit notes, and debit notes. It is also applicable to various transaction types and business relations, including B2B, B2G, and B2C transactions (certain conditions apply). The only excluded group is cross-border transactions.

South Korea’s next step towards invoice digitalization was the introduction of the electronic reporting mandate, which imposes an obligation to immediately submit e-invoices to tax authorities. This model is commonly known as the Continuous Transaction Control (CTC) model. The South Korean solution is not fully real-time, although it comes close.

The South Korean e-invoicing concept already has a significant history. The most recent developments are expected to come into force in July 2022. However, it is worth looking at how the concept has evolved over the past 10 years.

The e-invoicing regulations entered into force in January 2010. Since then the e-invoicing concept has been available in South Korea. A number of amendments followed the introduction, embracing ever more taxpayers and allowing for the spread of the concept across the country. First, it was made mandatory for business entities in 2011. The obligation was extended in 2012 to individual businesses generating sales above 1 billion KRW. Over time, the revenue threshold above which e-invoicing would become obligatory was reduced in both 2014 and 2019. This threshold was further reduced in July 2022, from which time the issuance of e-invoices became mandatory for individual business owners whose total amount of taxable supply value for the previous year had been 200 million KRW (around $160,000) or more.

It is worth mentioning that the South Korean e-invoicing concept is considered very successful because, according to the statistics provided by the National Tax Service, the usage of electronic invoices rocketed to almost 100% in 2011, compared with 15% in the first year when the e-invoicing was still voluntary.[1]

Another interesting element is that since adopting the e-invoicing mandate, a special early warning system has been introduced, which improved identification and decreases tax fraud.

In many jurisdictions, including South Korea, the reporting of e-invoices constitutes an important part of the e-tax revolution. However, the concept of e-invoice reporting in the country was already well advanced long before the e-invoicing regulations were applied in 2010. Taxpayers in South Korea were already obliged to send paper invoices to NTS. The introduction of the e-invoices greatly simplified and streamlined this process, and increases the effectiveness of tax audits and fraud detection.

Issued e-invoices will immediately be submitted to NTS. However, VAT regulations provide for different deadlines for the issuance of invoices. The general rule is that electronic invoices will be transmitted within one day of issue. Still, the transmission may be delayed if the issuance of the invoice is delayed (for example, until the 10th day of the next month for summary monthly invoices).

The reporting of e-invoices requires the use of digital signatures, which must be used to sign the e-invoices. The electronic invoice data is reported to the NTS in XML format.

The submission of e-invoices is available in South Korea using different options, including digital and traditional submission solutions. 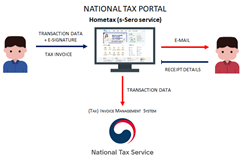 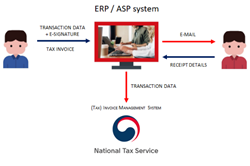 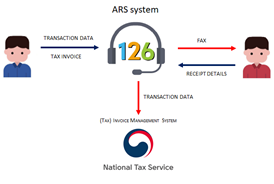 Additionally, it is also possible to submit the invoices in person at a local tax office. This practice was commonly used before the enforcement of the electronic invoicing regulations.

The following steps must be followed to manage the e-invoicing process.

The e-certificate is needed to issue and submit the tax invoice. Alternatively, a security card can be issued by the tax office and an electronic (tax) invoice can be issued through Hometax, reachable at the NTS portal.

Taxpayers must register as a member at Hometax (www.hometax.go.kr), which is operated by the National Tax Service, or at an electronic (tax) invoice issuance site operated by a system operator (ASP).

3. Issuance of the e-invoice

An electronic (tax) invoice, generated according to the standard (which requires an electronic signature), is issued at the time stipulated by the VAT Act, and is then sent to the purchaser’s e-mail. In the case of issuing a summary monthly (tax) invoice, it is exceptionally available until the 10th of the month following the month being reported.

When preparing the sum table of sales/purchase (tax) invoices, only the total amount of the electronic (tax) invoice is written. It is not necessary to fill out the details for each customer.

The South Korean e-Tax system is advanced and it seems there is not much need for further development. In terms of e-invoicing, the most important upcoming change is another decrease of the threshold for taxpayers who are obliged to issue and transmit the e-invoices (from KRW 300 million, to 200 million). The change is expected to come into force in July 2022. 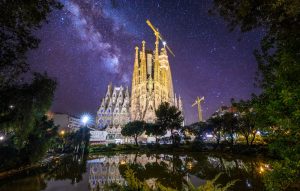