Mandatory SAF-T in Romania from 2022

Romania is introducing obligatory SAF-T reporting as of January 2022. The first stage applies to large taxpayers. The local, Romanian name for the new SAF-T measure is the D406 Informative Declaration. 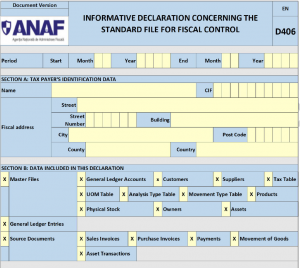 Romania already has detailed local VAT reporting requirements in the D394 form, which is a kind of local sales and purchases listing. Still, for a few years, Romania has been considering the introduction of SAF-T because of its more comprehensive reporting and coverage of more areas (not only VAT). However, according to the statement by Elena Timofte, SAF-T Project Leader at the Romanian tax authorities (ANAF), ANAF is considering removing some reporting obligations (including D394), once SAF-T has been introduced.

The frequency of reporting using the Informative Statement D406 is based on applicable VAT periods. For large taxpayers this is usually monthly. When it comes to submission deadlines, SAF-T files need to be sent to tax authorities by the end the month following the reporting period. Standard periodical SAF-T reporting does not cover information about stock and assets. These sections need to be reported separately by deadlines specified in financial statements reporting or set by tax authorities.

Worth mentioning is that the SAF-T obligation is also going to be imposed on foreign entities that are registered in Romania for VAT purposes.

The main format of the Standard Audit File for Tax in is XML. That is currently the most common format for detailed, structured tax reporting. However, something that is specific to Romania is that the final D406 report should be submitted to tax authorities as a PDF file, with an XML file attached.

ANAF provides taxpayers with a dedicated tool: DUKIntegrator. This enables a technical validation of XML files and the creation of the required PDF file with an attached XML. However, generating the XML file itself needs to be done either directly through the ERP or using a third-party solution, since tax authorities’ tools do not support this process.

The final PDF/XML D406 return has to be digitally signed with a qualified digital certificate. Exact submission is performed electronically by simply uploading generated files to the e-Guvernare website. The result of file transmission is updated in the Virtual Private Space (SPV) service, through which taxpayers receive notifications from ANAF about submitted declarations. The SAF-T receipt confirmation will be delivered through the SPV.

Very large D406 returns can divide the XML file into several parts. Division of such files needs to be made as sub-sections (which then cannot be further split into smaller parts).

The structure of Romanian D-406 is very much in line with OECD SAF-T standard. There are four main sections of the file: Header, MasterFiles, GeneralLedgerEntries, and SourceDocuments.

Each main section is divided into a number of sub-sections, which are then divided into another sub-sections, and so on. This results in an extremely detailed requirement with hundreds of fields to be reported. Indeed, some areas, such as assets and movement of goods, are excluded from periodical monthly/quarterly reporting. However, there is still a large amount of data to be reported regularly (such as general ledger entries, sales invoices, purchase invoices, master data of supplier and customers, and tax tables).

In order to generate the D406 file in line with the structure provided by ANAF, it is required to perform a significant number of mappings. A lot of fields in SAF-T only accept strictly defined values. Therefore, taxpayers need to map data from their ERP to the relevant SAF-T fields. For instance, there are over 40 codes available to describe separate invoice reporting types, such as 380 for standard invoices and 381 for credit notes. Another example is that GL entries need to be mapped to the Romanian Chart of Accounts, which features about 600 account numbers.

What is more, assigning relevant SAF-T VAT codes to particular transactions needs to be performed in great detail. SAF-T tax codes contain six digits (the first one indicating a particular tax, such as 3 for VAT, for example. For supply transactions there are about 50 different VAT codes available, which need to be correctly mapped to taxpayer transactions. Examples of D406 VAT codes are provided in the table below.

There is a ‘grace period’, but…

Romanian tax authorities provide taxpayers with a six-month grace period. This means that non-compliance with SAF-T obligations (no submission, or incomplete submission, for example) will not be penalized for the time being. However, all required files for January, February, and March 2022 will have to be reported by the end of July at the latest. Thereafter, each failure of submit a valid SAF-T report will be subject to relevant fines. For example, not submitting D406 within the specified deadline could incur a fine of up to RON 5,000.

Despite the grace period provided, it is recommended to start preparation for SAF-T reporting as soon as possible. In comparison with other e-Tax requirements, the Romanian D406 is to be considered very complex. First of all, periodic reporting (without the tax authority’s request) contains not only VAT data (as it does in Poland), but also many additional pieces of information, such as general ledger entries. That results in a significant volume of data to be generated and reported each month.

Retrieving so much data from the ERP system and other sources is a challenge in itself. Moreover, the Romanian SAF-T requires the performance of a lot of data mappings at a very detailed level, including the aforementioned invoice types, accounting numbers, and tax codes.

Therefore, implementation of D406 reporting is a comprehensive tax technology project that will require the involvement of several functions, including IT and tax. 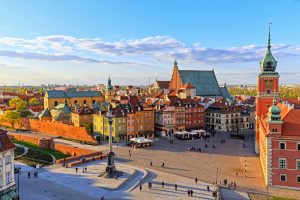